In April and May we successfully completed the Melbourne and Sydney HIA Home Shows.

The Melbourne Home Show which took place over 4 days from the 5th until the 8th of April 2018 brought record breaking crowds to the Melbourne Convention and Exhibition Centre.

This was the 2nd time we had used this new and improved show stand and it didn’t disappoint (in fact we were named runner up in the Show Stand of the Year Awards). We had a fantastic mix of Alspec staff and customers manning the stand, with the Carinya dealers being inundated with house plans and quote requests all day every day.

Throughout the show there was a huge theme from a majority of show attendees to be on the look out for window and door products which could be double glazed and those which were Australian made. That was a big tick for us and led to signage to advertise these facts being created for the Sydney Show. We had a massive amount of interest in the smooth running Carinya bottom rolling bi-fold door (for the renovation market especially) and the Centor S1E retractable screen which complemented the Carinya bi-fold incredibly well.

The Sydney Show this year was held over 3 days from the 25th until the 27th of May at the International Convention Centre in Darling Harbour. Although this was a day shorter than the Melbourne show it felt as though we had just as many people through the stand over the 3 jam packed days. Once again we collected the runner up award for the show stand of the year and for the 2nd show running we ran out of Carinya/Invisi Showbags.

There was huge interest in double glazing with the attendees being very clued up on the potential benefits of double glazed products with also a lot of questions regarding acoustic performance of our range. There was a lot of interest in the Carinya Corner Stacking Door and a lot more attention than usual in the CityScape Shutters. However once again the S1E was the show stopper getting hundreds of people into the stand.

Thanks to both branches for their assistance, it is always much appreciated. Next Stop Perth in August. 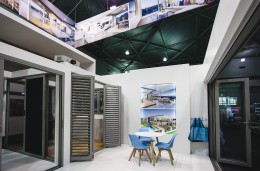 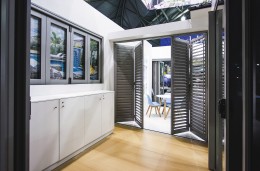 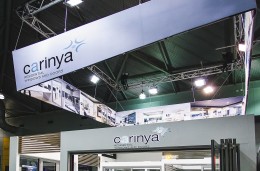 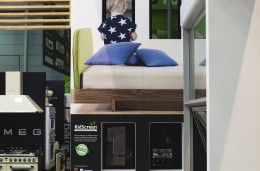